Sarah created a Vlog about our experience leading up to and racing at the FIS World Cup Women's GS race at Kronplatz, Italy.

And we're back! World Championships in St. Moritz, Switzerland last year went well and now I've been named as the coach for Team Mexico in the 2018 Olympics in Pyeongchang. Holy shit!

I found out this news pretty casually over the summer while at Mt. Hood doing Party Beach Ski Camps. "You are the coach," Sarah said.

Fast forward to around Christmas time and I get a photo message with flight details, SLC > Seoul, Korea! What!?! It's happening.

So, again, last summer at Hood, Sarah was training with the camp she coaches for, Erich Sailer Camp from Buck Hill, MN. She told me she was feeling so good, like the way she used to ski a few years back. Fast, clean. Last run of the day, boom, there goes the ACL. Some great momentum halted, back to square one. Crushed.

Ever since Sarah's son, Lasse, was small, (he's 9 now) she had a dream of living in Northern Italy with her family, the Sud Tirol region, full time. She'd enroll Lasse and her kindergarten aged daughter, Resi, in school, having them learn German, fully immersed, and also get herself some world class training in this small but legendary village. Kastelruth, Italy is a gorgeous little town, nestled in the Dolomites, widely regarded by most skiers who've been here as the most beautiful region of the Alps.

The plan to live in Kastelruth continued, what it looked like changed slightly. Sarah has been focused on recovering her knee while across the pond, working with a highly regarded physical therapist and being a mommy to her kids as they adjust to this new, often times difficult, life in a foreign country with school in a new language.

Seven months out of surgery she's back to the World Cup. I wanted to come over to Europe to do some races with her so that we can reconnect before the big show. I want to take this seriously and do the best I can do for her as her fifth and (so-called) last Olympics. I say "so-called" because, like I explained in a previous post, she's truly addicted to ski racing and may just compete forever. She's already talking, albeit with a laugh in her tone, about the 2019 Are, Sweden World Championships.

So here I am, in this cute little village in the Dolomites, ready to wake up at the crack of dawn to drive along winding mountain passes about an hour away, but about 10 minutes as the crow flies, to Kronplatz, Italy for the women's World Cup GS race.

We arrived in Kronplatz a day in advance to do the "hill free ski", which turned out to be cancelled due to new snowfall. Usually before a World Cup race they'll let the competitors ski on the race slope to get a feel, without gates. Racers have differing views of this concept. Some like to take advantage of being on the competition slope, while others think its almost a disadvantage because their free skiing turn shape is different from how the course will be set, and it gives them a skewed view.

Instead of the hill free ski, GS training was offered across the race hill on Passo Furcia/Furkel Pass. We arrived in Kronplatz in time for the free ski, but instead quickly hooked up with independent American skier, Megan McJames, and scurried up to training for a few runs to get their rhythm dialed before the next day's race.


They only took three runs, just to get a feel, but not over train so they can stay fresh and ready to rip tomorrow. We were done around 11:30, so we had the rest of the day to tune skis, have lunch, and check out the epic spa in our 4 star hotel!

5:00pm Team Captains meeting: coaches from each nation attend to represent their athletes, make sure all the athletes are accounted for on the start list, in the right order, get the scoop on what's happening on race day, present any questions or concerns, and socialize a little bit. At this particular captains meeting, there was a fully catered spread with wine and beer. They served hot food, a full wheel of parmigiano, nibbles and Prosecco! I love Italy.

Sarah is starting bib #54. There are 60 competitors. Ok, we got this. Its crazy to think that Sarah is technically the back of the pack with 14 points. Back home at a regular FIS race she'd be the points. Its all relative. Mikaela Shiffrin has 0 GS points, Tessa Worley has .03 GS points - insane.

Here we go! Another World Cup race! I am a World Cup ski coach. Pinch me. I feel like a badass. This is the top of the top. So professional. So much time, money, preparation and effort goes into these events.

As we get to the start for inspection we ski by the greats, the top competitors from each nation, women from Slovenia, Czech, Italy, France, Austria, Norway, Sweden, Canada, Poland, Russia, Croatia and MEXICO!

The race hill is steep and slick, like most World Cup races, but this one is particularly challenging with a 61 degree headwall, double fall aways is it slopes to one side and the other, a few rollers, and a turny course set. Its technical skiing, which is good, Sarah is good at turning. She was a Slalom specialist and won a world cup at Lenzerheide, Switzerland, in 2005, (the year I graduated High School) which is coincidentally our next stop on the World Cup before the Olympics and before I go home to Salt Lake for a hot second before Korea.

We inspect the course pretty fast, no over thinking things. This is a race about good, solid technique; outside ski pressure, releasing the ski down the hill, maintaining a good line, out and back. You can see this point proven by Mikaela Shiffrin's first run, she leaned in, she fell. Bye bye.

Good, solid technique. Even on the World Cup its just that simple.


We have about an hour and 20 minutes before Sarah's turn to go, so we take a free ski run down this gnarly groomed run thats crazier than the race trail, itself. Its super steep, crazy side angle rollers, and just the most beautiful fresh groom. I get follow cam of Sarah but need to stop before I eat shit and hurt myself! Then we wait. Ski racing is so much about "hurry up and wait". Like I said, so much time and preparation go into these events, and your race run is only like 2 minutes total. And thats if you even get 2 runs. The winner, Viktoria Rebensberg from Germany, raced for 2 minutes 9 seconds total. All of our effort for this race wound up with 1:10.63 seconds of actual racing for Sarah. This is how it goes.

One and done. Sarah took some time to schmooze in the finish area, greet old friends and fans, sign some autographs, "can I make selfie?!" little race fans exclaimed as we ski over to the gondola. We watch the second run from the finish area, and speak of the devil, Alberto Tomba, ski racing legend, "La Bomba" is there showing face! So many stars, its amazing. Then its back to Kastelruth to regroup, make a plan for Lenzerheide and reconnect with the kiddos before heading off to do it over again.


We hope to train back at Kronplatz on the race hill before going to Lenzerheide, as this is the best and closest prepared slope. She needs to train on those icy, difficult slopes more. She needs more milage on World Cup level hills. Its funny to say that because she has raced literally countless World Cups, and FIS races in general over the years. Yet it was back to ground zero after her injury, so she really does just need the miles, the repetition to gain confidence. She was timid on race day at Kronplatz. Rightfully so, as it was her first race back on the big stage post injury. She also tunes her own skis from two years ago. The women she's up against have legit, brand new, dialed setups, service men, and so many more advantages.

But, as a wise, veteran ski racer once said to a group of eager young racers, "you need to have the memory of a goldfish." 3 seconds. Whats in the past is over and done. Forget about it and move on because right now is right now and tomorrow is a new day. You cannot dwell on mistakes. This is wisdom for regular life as well. All you can do is learn from your actions and use it moving forward. So thats what we will do. That is why we raced Kronplatz, that is why we will race Lenzerheide. We need to see where we are at, I need to see where she is at, so we can go into the Olympics with some good preparation. 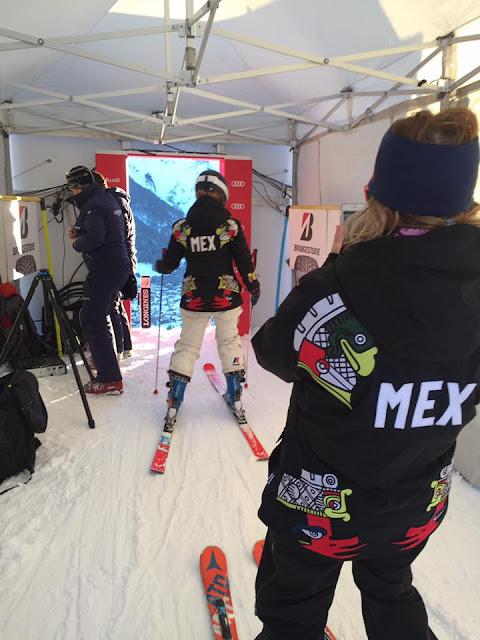